Ladies and Gentlemen in Pawnland!

But yet another fabulous piece about the much larger conspiracies that have been underway for a long while, with the illegally created central banking system.

I sincerely hope you enjoy the read – Jerry Whitehead

Last evening I got the WSJ breaking news story that busted the global capital markets today. Note the time, 8:06.

Look at the immediate consequence to the EURDLR fx rate. There are big gaps down for EUR shortly after the story hit the tape in Asia. That knee jerk reaction was the same market “read” that gutted a number of Euro banks today: 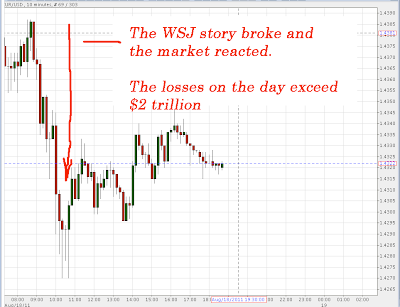 I looked at the WSJ story and concluded that it was a game changer. I wrote Tyler Durden at Zero Hedge about this. The “Re:” that I used was:

ZH had a piece today on the WSJ story that caused all the trouble. The “plant” theme was repeated. from the ZH article:

Why would (the Fed) use its traditional mouthpiece the WSJ to spread fear?

Tyler answers his own question with:

Why QE3 of course.
This is very important stuff. Three critical questions:

I) Was the WSJ story a plant?
II) If so, who planted it?
III) Why in heaven’s sake would anyone (especially the Fed) want to bomb the capital markets?

IMHO opinion this was a plant. The author was Carrick Mollenkamp. This guy is a seasoned pro. This story was vetted at the highest levels at the WSJ. The editors knew full well the implication of this article. Every ‘i’ was dotted and all quotes were checked. There are no mistakes in this article.

But who were those “sources” that the WSJ hung their hat(s) on? This was one of the biggest stories of the year. Who are the readers of the WSJ supposed to rely on regarding the serious issues raised in the article? Easy. No one is the answer. These are the attributed sources for the guts of the story:

Federal and state regulators, signaling their growing worry that Europe’s debt crisis could spill into the U.S. banking system, are intensifying their scrutiny of the U.S. arms of Europe’s biggest banks, according to people familiar with the matter.

The Fed is demanding more information from the banks about whether they have reliable access to the funds needed to operate on a day-to-day basis in the U.S. and, in some cases, pushing the banks to overhaul their U.S. structures, the people familiar with the matter say.

Fed officials recently have held meetings…………. according to the people familiar with the matter.

You can come to your own conclusions on this. It is my opinion that there is no way the WSJ could have run this story without direct confirmation from the Fed. Those people who are so “familiar” with this matter are senior Fed officials.

Is it remotely possible that the Fed deliberately engineered a collapse in markets in order to get the necessary political “cover” to initiate some new massive monetary policy as TD suggeted?

There is one possible clue in the article that points to this conclusion:

Until recently, that (Euro funding problems) hasn’t been a problem. Thanks partly to the Federal Reserve’s so-called quantitative-easing program, huge amounts of dollars have been sloshing around the financial system, and much of it has landed at international banks

This observation from Mollenkamp is from the Feds lips. The obvious conclusion from this paragraph is that to reverse the crisis now boiling over in Europe more “QE” is required.

What is QE? It can be anything that stimulates the price, velocity and availability of money. It does not have to be LSAP (traditional QE) or an extension of ZIRP. It can take other forms.

The most convenient of which is to open the Fed’s $ swap lines to the Euro banks. We may get this development by Monday morning.

My take on this is that the Fed manipulated the news. It did so very deliberately. The Fed had an agenda; they did whatever they thought necessary to gain acceptance for what they have up their sleeve. The story was deliberately timed to undermine (further) the European banks. It worked. Now Bernanke and his cohorts have the excuse they need to act.

That’s my take on this story. We may never know the truth. I wonder if Governor Perry understands this stuff. If he did, and he got the facts on this “out there” he would have a very big cannon to shoot. If the Fed did manipulate both the press and the markets to justify its actions it would be a very big deal indeed. 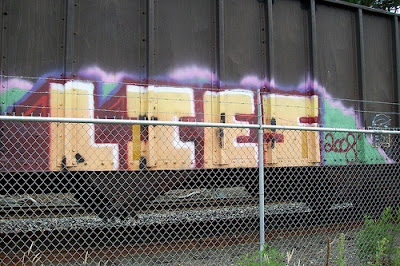 Current Trends for the Pawn Industry Hello to all